It all began when I purchased this potted Katmon Sibuyan (Dillenia sibuyanensis) as soon as @philnativetrees posted it for sale. It was just on a whim – I hadn’t even grown anything properly before then, but knowing that native species are hardy emboldened me to take the plunge. 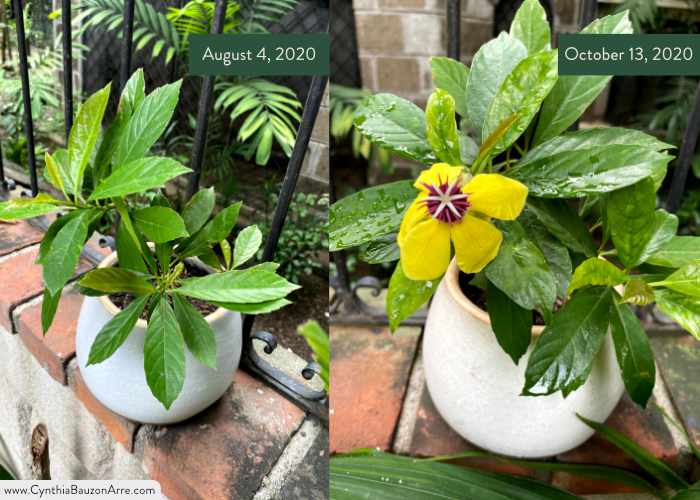 The Katmon Sibuyan and its first bloom under my care.

Taking care of it was easier than I expected. It arrived during rainy season so I didn’t even have to water it much, and in the span of just a few months, it surprised me with this beautiful yellow bloom. <3 (I was told that Katmon Sibuyan blooms in its 3rd year so I’m thinking that this particular plant was marcotted or grown from a cutting. )

It gave me a couple more blooms until December, and before I knew it, I bought another sapling. This time, it was a Malabulak (Bombax ceiba). Notice that the plants I’ve bought are those which I’ve already drawn.

The Malabulak can grow up to 25 meters tall. Afraid that I don’t have enough space in our little backyard garden, I gave it to my parents so that they could have it planted in our family home next door. 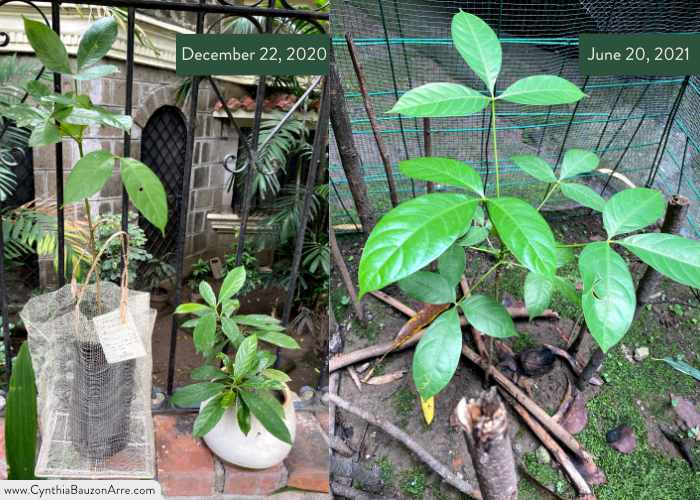 Malabulak sapling beside the Katmon Sibuyan when it first arrived (left). it grew taller quickly after being planted on the ground (right).

The third, and incidentally, the last native tree I bought was a Katmon Kalabaw (Dillenia reifferscheidia) whose leaves are just so beautiful with their deeply defined veins. I have not bought a single plant since then because by this time, I had grown confident enough to actually spend more time in the garden and learn how to propagate. It was the perfect time too since my Katmon Sibuyan finally successfully bore a fruit. (I say successfully since previous fruit buds were stolen by birds before the fruit could form.) I tried sowing the seeds but I wasn’t sure about what I was doing so unsurprisingly, nothing grew.

However, there was a chance for a second try at seed germination. Around this time I also received seeds from Ms. Cel Tungol of the Philippine Native Trees Enthusiasts (PNTE) group on FB as token for supporting a funding drive. Meet my little Supa (Sindora supa): Supa seedling looking otherworldly at first sprout (left), and after almost a year later. Its sibling, standing beside it, emerged a few days after the first sprout (right).

I had been posting my gardening adventures on IG Stories all this time, which led to befriending fellow native tree lovers. One such kindred spirit is Ms. Rhona who generously offered to send me several saplings that she grew herself. Despite not having prior experience in growing trees, I was excited to adopt them. It’s been 10 months since their arrival and I feel that I’ve also evolved so much along with them. I was able to learn about and appreciate native species through the Drawing Native Trees for Conservation projects with Forest Foundation Philippines, and now, seeing the trees (well, treelets) up close and taking care of their daily needs hands on, the conviction to raise awareness to help protect and make them thrive only grew stronger. The trees now, still in containers until they grow bigger so that we can assess where to plant each of them.

Things I’ve learned so far – spots in the garden where each of them seem happy, who needs the most water or sun, who grows fastest, and whose leaves caterpillars enjoy the most. I’ve also learned about what to feed them (they like compost and the occasional wormy treat), and how to de-stress them after transplanting or over-sunning. Needless to say my social media screentime has decreased by at least 80% ever since I seriously started gardening.

The most recent additions in my native tree garden are this lush Kamuning, an early Christmas gift from my FFP BFFs Diane and Shen, and an Igem Dagat (Podocarpus costalis) which rode a bus all the way from Ilocos Norte! Maria saw me drawing an Igem Dagat in IG Stories for my upcoming workshop with EDC Binhi and she showed me a photo of their 50-year old tree. I’ll reserve this story for next time. There are so many things I’d like to share about my growing native trees journey so I even made a new category for these posts. Hopefully that will motivate me to keep updating this blog. 😀